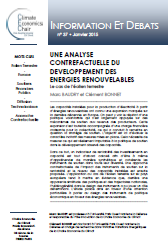 Since the 1978 Economic and Openness reforms, China has made remarkable progress in economic and social development, which has even accelerated in the first decade of the 21st century; however, it has also become the largest annual carbon emitter since 2007 in absolute terms. In a bid to achieve a low carbon economy, China will have to adopt bold policies and measures to decouple its economic growth from carbon emissions. Sole reliance on administrative tools has proven to be insufficient, and alternative policies are needed to control the rapid GHG emissions growth. To this end, China has started implementing pilot emissions trading schemes (ETSs) in some regions to pave the way for a national scheme. This paper will first present the profile of Chinese GHG emissions and investigate the drivers of the rapid carbon emissions growth. We will then describe China’s engagement in international climate negotiations, how it committed to curb CO2 emissions, as well as policies and measures that China put in place to achieve mandatory energy and climate goals domestically. We will finally look more closely into China’s move towards carbon trading before examining regional ETSs’ developments and pinpointing challenges and ways forward for inter-pilot linkage or scaling up to a national level.