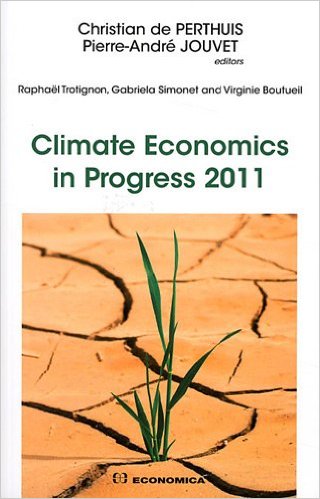 Climate Economics in Progress offers a global overview of the present status of action on climate change. Drawing on the most recent data, it analyzes the development of carbon markets in Europe and other parts of the world. It also examines the conditions for including major players such as China and new sectors such as agriculture, forestry and transport in the fight against global warming. The book is essential reading for anyone wishing to understand current advances in climate control, which could pave the way for a new form of economic growth. The book was produced under the direction of Pierre-André Jouvet, Professor at Paris-Ouest University, and Christian de Perthuis, Professor at Paris-Dauphine University, and was written by the researchers of the Climate Economics Chair, under the coordination of Raphaël Trotignon, Gabriela Simonet and Virginie Boutueil. The Climate Economics Chair is a Paris-Dauphine University and CDC-Climat initiative, under the aegis of the Europlace Institute of Finance research foundation. It brings together a group of researchers whose goal is to make the link between academic research on the economics of climate change and the implementation of operational tools, thereby allowing the climate issue to be integrated into the functioning of the real economy.