Policy Brief #8 The Price of Carbon : Ways forward after COP-21 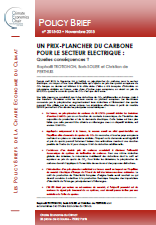 The Price of Carbon : Ways forward after COP-21

The method used in preparation for the Paris climate conference (COP-21) involves collecting voluntary contributions from each country with regard to action on climate change and negotiating a common framework, including an independent measurement and verification procedure and a provision for the periodic review of commitments. This method postpones discussions on economic instruments and pricing carbon until after COP-21. This Policy Brief outlines three options for the large-scale introduction of such instruments in the years ahead.