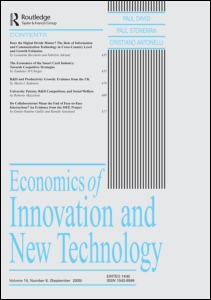 Article publication « The private value of plant variety protection and the impact of exemption rules », by Marc Baudry and Adrien Hervouet, in the Economics of Innovation and New Technology revue.

Plant Breeders Rights (PBRs) are sui generis IPRs intended to promote plant variety creation. Two characteristics distinguish PBRs from patents: the research and the farmers’ exemptions. This article attempts to assess the impact of these exemption rules on the private value of PBRs. For this purpose, a microeconometric model of PBRs renewals is developed and estimated. This model extends previous models of patents renewals by allowing the use of PBRs-specific variables. It is argued that simple tests on the coefficients associated to key PBRs-specific variables can provide insights into the impact of the two exemption rules. Implementation to PBRs in France over the period 1973-2011 for six major crops suggests that neither the farmers’ exemption nor the research exemption have a clear cut effect on the private value of PBRs. We conclude that there is no evidence to argue in favor of a reform of PBRs.

You can find the article here